Celebrating the Centennial of Women’s Suffrage: The Music of the Movement

Celebrating the Centennial of Women’s Suffrage: The Music of the Movement 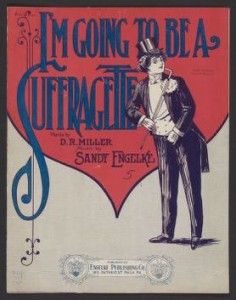 Today is the 100th anniversary of the 19th Amendment granting women the right to vote. It’s hard to believe it was only two generations ago that American women were disenfranchised. My own grandmother was prohibited from casting a ballot.

Even after the ratification of the 19th amendment, black women (as well as men) struggled to achieve suffrage. It took 45 more years for passage of the Voting Rights Act. Even now, the right to vote is under attack. Vote suppression appears in many guises.

The history is important, and much more complicated than most of us have been taught in school. If you have interest and two hours, here’s one discussion from today with scholars from Carnegie Mellon and Johns Hopkins from All In Together.

Free Resources (you pay for in your taxes)

Our nation’s capital has a wealth of historic resources open for all of us to view and visit. Fortunately, many materials are now digitized for online access.

Some excellent sources on the centennial of Amendment XIX’s ratification:

Befitting the protests of the suffragists (or “suffragettes” as they were called, somewhat belittlingly) many of the music works related to the movement are marches. If you’re looking for march music for piano improvisation studies, these are clear examples. With ‘snapping’ rhythms in the melody, stride ‘boom-chuck’ bass, and occasional fife and drum flourishes, they make fine models for inciting brisk lifts of knees in rhythmic movement classes.

Songs, hymns and piano works rallying women to the cause were met with breezy tunes about those cute little gals and plenty of men’s laments like The Suffragette Blues, When Women Go To Vote (“Who’ll hand us our shirt with the buttons all tight?”), 1898, and my favorite, The Anti-Suffrage Rose (“Jonquils they wear cannot compare with the Anti-Suffrage Rose!”), 1915. Several cover illustrations show women walking out on their hapless husbands and crying children, as if casting a vote meant a full-time, all out desertion.

The National Jukebox has a few related recordings, including this one: Since my Margaret Become a Suffragette. The main page warns that historic recordings may contain offensive language, and this one’s genre is listed as “Ethnic Characterizations.” It took me a minute to interpret which ethnicity this is offending. The castanets threw me off, but it soon becomes clear this is mimicry of an Italian-American accent. (“Since my Mar-ga-RET, she become-a the suf-fra-GETTE, my heart is wanna she break, she wear-a the pants, that break-a romance…”)

(My Italian-American husband considers this “the verbal equivalent to blackface.” He says, “I can imitate my grandmother. You can’t.” But that’s a topic for some other day.)

Children’s literature reflects the sexism and racism of its authors’ lenses and their readership’s preferences. I remember changing pronouns from male to female when telling stories, singing songs, and reading poems to young children just to even things out. Reading A. A. Milne’s Winnie the Pooh stories to my daughter when she was 3, I changed pronouns to make the character Piglet a girl – but sometimes erred and read the pronoun as written. (One night, she confronted me and I had to fess up. She accepted it. After all, how could Christopher Robin, Pooh, Tigger, Owl, Eeyore, Roo, Rabbit and Piglet all be boys?)

Even now, it doesn’t seem there are many books for young children about their hard-won rights, dignity and potential, yet sparkly fairy princess themes abound. Disappointing.

I did find one: Around America to Win the Vote: Two Suffragists, a Kitten, and 10,000 Miles by Mara Rockliff (Somerville, MA: Candlewick Press, 2016). Full disclosure: as I write this, I have only read excerpts and reviews like this one. My copy is in the mail two days away (or, who knows how long right now).

This book tells the tale of Nell Richardson and Alice Burke and their journey in April 1916 (real people, real story). In addition to the meaning of the story itself, the book presents it as a real adventure. At first glance, the tale in this format might offer young children opportunities for rhythmic play, movement concepts, percussion patterns and singing.

“Votes for women!” could be a refrain for singing, dance gesture and/or instrumental phrase. The various car troubles along the way invite movement studies with music accompaniment, as well. And the car rumbling along on diverse road surfaces through various regions might suggest rhythmic and characteristic variations tracing the journey.

Edwards, Gus: Composer, Maurice: Vocalist Burkhart, and Will D.: Lyricist Cobb. Since my Margaret become a suffragette. 1912. Audio. Retrieved from the Library of Congress, <www.loc.gov/item/jukebox-259866/>.