I’ve been meaning to post about the Turkey Trot for two Thanksgivings now. This is a few days late, or extremely early for next year’s Thanksgiving, depending on your perspective.

This began with Leonard Bernstein’s Turkey Trot, the fifth piece in his Divertimento for Orchestra. I love its changing-meter patterns and syncopation.

But what’s a “Turkey Trot,” if not a race for charity? In the early 1900s, it was a ragtime dance. Like the Fox Trot, Horse Trot, Bunny Hug, Grizzly Bear et al., the Turkey Trot was part of an “animal dance” fad that allowed people to act silly and have fun on the dance floor with the added benefit of appalling their elders. In 1913, “Ponderous Personages” columnist George Fitch wrote:

The turkey trot can be done by two persons quite readily but is more successful if at least three are present, including someone who will kindly consent to be shocked.1

Like ragtime music, ragtime dances originated in African American communities and caused quite a stir when adopted in white society, at least until they were revised sufficiently for acceptability. Meanwhile, the Turkey Trot was considered so improper that it was outlawed in many communities. Uniformed officials stood in the center of dance floors to enforce the prohibition.

In 1912, fifteen female employees of Curtis Publishing Co. in Philadelphia were seen dancing the Turkey Trot on their lunch hour. Edward Bok, editor of the Ladies Home Journal, witnessed the horror and had them all fired! The incident made national news, with assonant headlines such as “Girls Danced the Turkey Trot – And Editor Bok Saw Them and Was Fearfully Shocked.”2

I perused more old newspapers and came across another Turkey Trot episode from that same year, this one in Paterson, N.J. as reported in New York’s The Sun. The article is titled, “Shooed Turkey Trot Girl – Despite Paterson Cop She Came Back and Did the Bunny Hug.”

Police Sergeant Ryan… walked out on the ballroom floor while hundreds were dancing a twostep and ordered a pretty young woman in a lavender gown and her companion to leave the room. They were dancing what he believed to be the turkey trot. Police Chief Rimson has put a ban on the trot.3

The young couple was readmitted after the sergeant’s superiors reprimanded him. It seems the woman in the lavender dress was the daughter of a wealthy local contractor. On her return to the dance floor, she brazenly indulged in “the Boston dip and the bunny hug and at times she put in a few steps of turkey trot.” 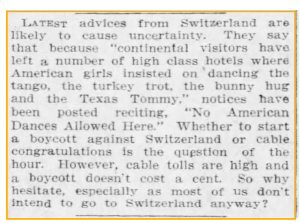 My third (and favorite) find comes from the Scranton Republican in 1913. Apparently, a jury was deadlocked in the case of Mrs. Mary Gray, age 76, who’d been sued by her nephew after she refused to move to his locale and allow him to control her money. The nephew “claimed she was incompetent to administer a $50,000 estate because she turkey-trotted with bartenders.” The trial involved testimony from 41 witnesses, including four doctors.

[The nephew’s] assertion that her inclination to turkey trot with persons who did not exactly belong to select circles showed she was insane was combatted by the four physicians who declared her of sound mind. Mrs. Gray also denied that she had ever turkey trotted with bartenders.4

(The article says the nephew intended to continue his case, but I’m not sure what happened next.)

Cultural Appropriation vs. Being ‘Appropriate’

Published dance manuals and other tracts of the time – many of which are online through the Library of Congress – denounced animal dances. As an example, Dr. Revels Alcorn Adams, author of The Social Dance, wrote:

The “Bunny Hug” is danced in imitation of the sex relation between male and female rabbits. The “Turkey Trot,” “Fox Trot,” “Horse Trot,” “Fish Walk,” “Dog Walk,” “Tiger Dance,” and the “Buzzard Lope,” are all imitative of the lower animals in their sex life, sex desire, sex excitement and sex satisfaction; and these things are in the minds of the dancers who understand the meaning of the animal dances.5

(Such things might be in the eye of the beholder, Dr. Adams.)

Remember you are at a social gathering, and not in a gymnasium.

Drop the Turkey Trot, the Grizzly Bear, the Bunny Hug, etc. These dances are ugly, ungraceful, and out of fashion.6

The Castles’ book goes beyond dance steps to address etiquette, fashion, beauty and more – all the tools of upward mobility – with stated goals of promoting propriety, as opposed to “vulgarity.” Their stock in trade seemed to be marketing social dance as respectable, at least when their advice was heeded; and they insisted that the Turkey Trot’s “contortions” had already been replaced by “something finer.”

Apparently, that finer something was the “One-Step.” In Social Dancing of To-day (1914), author Troy Kinney excoriated the Turkey Trot while identifying it as the progenitor of the One-Step.

The Turkey Trot (name to delight posterity) raced eastward from San Francisco in a form to which the word “dancing” could be applied only by exercise of courtesy. Literally, caricaturists could not caricature it; it made caricatures of its devotees. But they were not concerned with that. They were in the exaltation of rediscovery; they were happily, beneficially mad with varied rhythm, marked by free movements of their own bodies. The “trot” was easily learned; the problem became one of finding space in which to dance it, so quickly did its performers fill every floor within hearing-distance of a piano.

The cynical inference that morals or their lack bore any relation to the phenomenon of this dance’s rapid spread, is beside the point. Of the original “trot” nothing remains but the basic step. The elements that drew denunciation upon it have gone from the abiding-places of politeness; yet its gains in popularity continue unchecked. As though to emphasize its superiority to former mannerisms, it is just now urbanely changing its name: it prefers to be known as the One-Step. And in the desire for a new appellation it is justified, since no history ever so vividly recalled the fable of the ugly duckling.7

A respected New York socialite made the distinction even more clearly in 1913, defending the “No Turkey Trotting Allowed” sign at a charity ball in Hoboken.

“Of course I do not approve of the so-called ‘turkey trot’ or of any other dance that is not in every way proper, but I believe the name ‘turkey trot’ is getting to be a misnomer. It is foolish for people to call some of the new ‘onesteps’ the ‘turkey trot.’ I have learned a number of ‘onesteps’ and absolutely no criticism should be made of them, and yet, if one should dance them, say, for instance at a charity ball, some would raise the ‘turkey trot’ cry. I have seen these dances in New York society and at Newport and to my mind they are very graceful.

“It is not the dance but the way the dancing is done that should call forth criticism. Any dance can be made vulgar if a person is disposed to make it so. 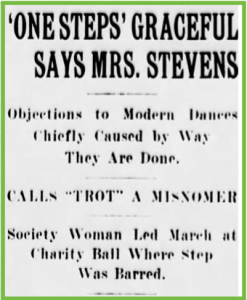 “People who do not understand have got in the habit of characterizing all the new ‘onesteps’ as the ‘turkey trot,’ which I think is a great mistake. If the custom were to refer to these dances as ‘onesteps’ instead of ‘turkey trots,’ and if they were danced as they should be danced, I do not believe anybody would find fault with them.”

Mrs. Stevens said she remained at the charity ball until 1:30 yesterday morning, and up to that time did not see any so-called “turkey trotting.”8

A contemporary view from author Danielle Robinson, in her 2015 book Modern Moves: Dancing Race during the Ragtime and Jazz Eras, notes the shift from the Turkey Trot to the whitened One-Step.

(R)agtime dancing and its turkey trot needed to change before they could be profitably marketed. Specifically, they needed to be whitened in order to appeal to a conservative, white clientele…. Indeed, the turkey trot could not become the One-Step, nor could ragtime dancing become “modern” social dance until contemporary conceptualizations of race partnered with innovative mass-marketing and production strategies of the early twentieth century.9

So exactly what was all the fuss about? Was the Turkey Trot a scandal because of the actual movements of the dance, or was the shock a rejection of African-American dance and music coming into white ballrooms?

Would the Turkey Trot by any other name – newly introduced as the One-Step – no longer be an outrage? Or did something about the dancing make the difference?

Descriptions (and videos) of the Turkey Trot vary widely even now, so it’s hard to know. Some say it was a close embrace that shocked people, but the waltz and other 19th-century dances had already transcended that horror. Others contrast the ‘refined’ movements of acceptable ballroom dances with playful, inventive movements of ragtime, but since ragtime dances were based on simple walking, and folk-dances from Europe weren’t exactly staid, I don’t see that as the whole answer, either.

I think there was something about the movement of ragtime dances that suggested their African-American roots even more clearly than ragtime music alone. It’s easy to imagine that the derivation itself was enough to frighten an already anxious, segregated society. Consider the same pattern’s recurrence through the decades since then: Black culture creates something fresh and inventive; white people become horrified when their own youth begin to adopt it; then it is covered, often in watered-down form, and sold to white audiences with great commercial success.

Back to the music that started me on this inquiry. Bernstein’s Turkey Trot is fun, if perhaps slightly sardonic. The changing meters and syncopation give a sense of off-balance playfulness bordering on downright goofiness.

Here is my rough transcription of the idea. (This is not authoritative – the notation is not Bernstein’s.)

The pattern is set up in the introduction as a 2-part dialogue, giving the sense that the top voice is jumping in “early” to disrupt the even pace heard in the first measure – reminiscent of an awkward dance partner. Again, a rough representation:

In the context of this piece, it makes sense not to consider the 3/4 as 6/8 with two iambic (short-long) patterns. It’s clear that Bernstein’s “America” from West Side Story alternates 6/8-3/4, but the Turkey Trot would lose a lot of energy from smoothing the syncopation into two equal, compound beats.

It’s all about that first rest. Does it seem like the third division of a beat in compound meter, or does it mark the start of the second beat in three?

Music is not what’s notated on paper – it’s what we sense aurally and kinesthetically. Sometimes music written in 3/4 is 6/8 in sound. Here, however, that’s not the case. Bernstein notates cut time and 3/4 at the beginning of the work, thus avoiding the need to insert time signatures frequently.

The energy in this piece, to me, is driven by that one short rest, and the syncopation it establishes. Contrasting it with a 6/8 version makes the point.

Have fun turkey trotting, with assurance that nobody is likely to kick you off the dance floor, fire you from your job or take you to court. (You might want to draw the blinds, just in case!)